It’s been a week since I got back from Black Rock City. Before going, I wondered why no one could give me a clear answer to what Burning Man (BM) was. “You just have to go and experience it yourself”. Now, a week after, being asked the same question, I too find it very difficult to answer. Maybe it’s just too early, as my mind is still processing and learning new things about what actually happened at BM. Maybe it just works better writing it down…

Let’s start with the facts. Especially for my friends back in Europe, who has never heard about BM or just seen crazy pictures on Google. BM began as a bonfire ritual in San Francisco in 1986 with 20 people building a wooden effigy in shape of a man and setting it on fire. (Reminds me of the North European tradition of building a witch out of wood and used clothes and burning her on midsummers Eve to release the evil from the local community). The ritual quickly grew in size and moved to the desert of north Nevada where it has since been. BM is a social and art experiment influenced by 10 main principles of radical inclusion, self-expression, self-reliance, gifting, decommodification and leaving no trace among other things. No phone reception, no Internet. In it’s 29 years it’s grown to 70,000 people, bringing people to the black rock desert from all over the world to burn the man and take part in one of the biggest celebrations of life.

I always wanted to go since I heard about it back in SF in 2005. It wasn’t so much the art, the community or the parties that sparked my interest it was my curiosity and desire to explore the unknown that made me decide to go. 10 years of detours later, it was finally time. My first offline “vacation” in as long as I can remember.

Prepping for BM is no easy task. Getting transportation, camp, costumes, desert gear and a place to sleep takes a lot of time and planning and shouldn’t be taken lightly. It seemed like a lot of work at the time, but I later realized that as a virgin burner you have no perception of effort and preparation that burners put into BM.

We arrived at our camp after spending 12 hours in line from Reno to Black Rock City. That sounds horrible, but actually wasn’t too bad. We spent the time meditating, shooting some drone video and talking to the other burners in the cars around us. It was a loooong queue…

Download On_the_way_from_Reno.mp4
After spending most of the first day setting up camp it was time to hit the playa for the first time. I got a lot of “see you on the playa” leading up to BM. I didn’t really get it. What and where was this playa exactly?
We jumped on our bikes and passed the Esplanade and reached the playa. I was in shock! I had dived into a big black ocean of millions of glowing led lights in unbelievable shapes and colors. Holy fucking WOW!


A warm feeling immediately hit my body followed by a big smile that would stick to my face the entire week. I was witnessing the imagination of 70,000 people all at once! Was this still planet earth? Couldn’t recognize it. Had to open and close my eyes a couple of times to make sure it was real. In a couple of seconds my cynical opinion of mankind, constantly fed by world news, disappeared and my faith in humanity was fully restored. If human creativity is capable of something so amazing what else can we accomplish? Only half a day in, and my life perceptions were already being pushed. The magic of Burning Man had begun…

The BM founders originally saw the white dusty desert playa, the size of a small European country, as a big canvas for burners to express themselves. For every 25 meters there was a new spectacular out-of-this-world art installation that had to be seen, felt and interacted with - a never-ending amusement park for adults.

I quickly realized that even if I went from artwork to artwork and camp to camp non-stop I would never get to see and experience everything! Normally, it would have been my ambition to experience it all, but this was different. I quickly became very calm and content with the fact that everything wasn’t suppose to seen. No chase, no checklists, just be present and enjoy… the playa would provide.

One of the art cars I was really looking forward to see and hear was Robot Heart, known for its electronic music and epic sunrise sessions. For all of BM this was the only disappointment. In all my years in the US I’ve longed for an underground electronic scene similar to Berlin, but was always met by mainstream EDM disguised as deep house. Unfortunately Robot Heart was no different. Tycho, Skrillex, Diplo and a bunch of other big DJs whos tracks you can hear at any nightclub in Vegas. I was surprised Tiesto or Avici wasn’t playing! I quickly continued my search and went further into the deep playa. A field of neon colored circles in front of a spectacular art car that looked like it just arrived from outer space got my attention. It was the Mayan Warrior and Rebolledo had just got on for the sunrise session. Halleluja! The sun rose and changed the desert from complete darkness to a yellow dusty haze while parachuters came flying down eclipsing the sun. Every cell in my body was smiling as if 34 years of serotonin was released in one pop! I was right where I needed to be and at exactly the time I needed to be there. I had not been that happy since childhood. #permasmile

The next day we went to a 3D futuristic gallery that freaked me out after two seconds. My mind was over stimulated. An old woman and veteran burner quickly grabbed my hand, looked me in the eyes and told me I didn’t need to worry and she would guide me through the gallery and let me describe what I saw. With my 3D glasses I calmly enjoyed the journey. And this went on and on – one more profound experience after another. It simply doesn’t stop at BM. Wherever you go people, whom in the real world would have been complete strangers, meet you with a hug and a smile and usually a small gift without expecting anything in return. When 70,000 people lives by such principles it creates an atmosphere that is warm, loving and open towards everything. I started to think that BM was a snapshot of how the future would be. Had the experiment been a success? Had we finally cracked the code of making everyone happy by being kind, close and present? For a place where nothing should make sense, it just did.

The days blurred into nights or maybe it was the other way around. Time didn’t really matter. Suddenly, it was the last day of the burn. I had postponed my visit to the holiest of the art installation on the playa, the temple. I had heard about it before going and I was afraid to be completely overwhelmed by its sadness, so I decided to wait until I was ready. That right time didn’t really come, so it became Sunday before I took my bike and told my friends I was going there alone.

I think the temple was created because the Man couldn’t possibly hold all the sorrow and sadness that comes with the burners who visit Black Rock City. Radical self-expression goes for all aspects of life, including the most painful, and the temple is a manifestation of that. Because I had postponed my visit to the last day, the temple was already closed and was being prepared for the burn that night. It is a tradition that after the Man burns on Saturday the temple burns the following day. A smaller temple had been raised in front of the main temple so people still had a place to go. As I got closer, I could feel a heavy weight on my shoulders and a powerful silence that was very unlike what the previous days had been like. I started reading the first letters, wall inscriptions and poems while glancing over the many pictures and personal items next to them. Lost family, friends, wives, boyfriends, children, physical and psychological pain and sickness, torn ties between loved ones, outcries from people barely hanging on to life. Most people were crying. I felt a rock hit my stomach and tears that usually stay inside came streaming down my face. Two people I didn’t know gave me a hug, not asking who I was or what I cried about. They were just there to provide a shoulder. The last week had stirred things around and the temple only had to give me a gentle push for all of it to reach the surface. I was inconsolable. After some time, I started to feel the weight on my shoulders lifting and the thoughts that were sparked by reading the walls of the temple were either disappearing or settling in a different location. I couldn’t really talk for a long time after. With the guards down, BM had given me another powerful emotional experience to appreciate.

That evening the temple burned and I was sitting in the first row watching the massive fire. The fire mesmerized most people and I could feel how all that pain and suffering the temple symbolized was released into the black sky. The first person shouted, “I love you” out to the crowd. Thousands of people immediately repeated those words to each other as a last gift before everyone went their separate ways thinking, in 358 days I’ll be home again :) 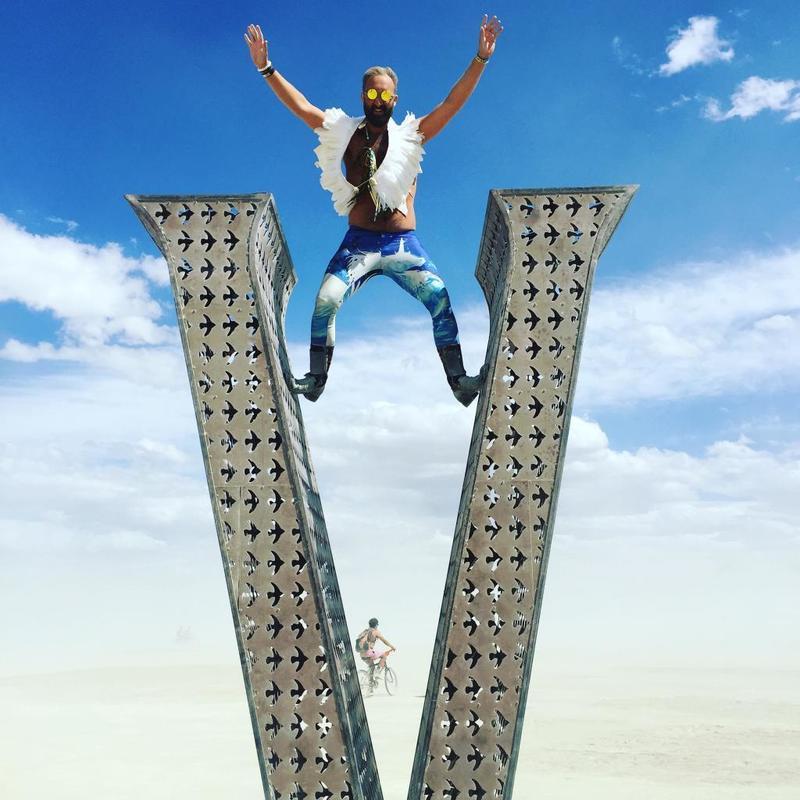 Entrepreneur, CEO, world traveler, comedian and First Lieutenant. From the Danish army to business schools of Hong Kong and New York to Rocket Internet in Australia and South East Asia to Y Combinator in Silicon Valley...